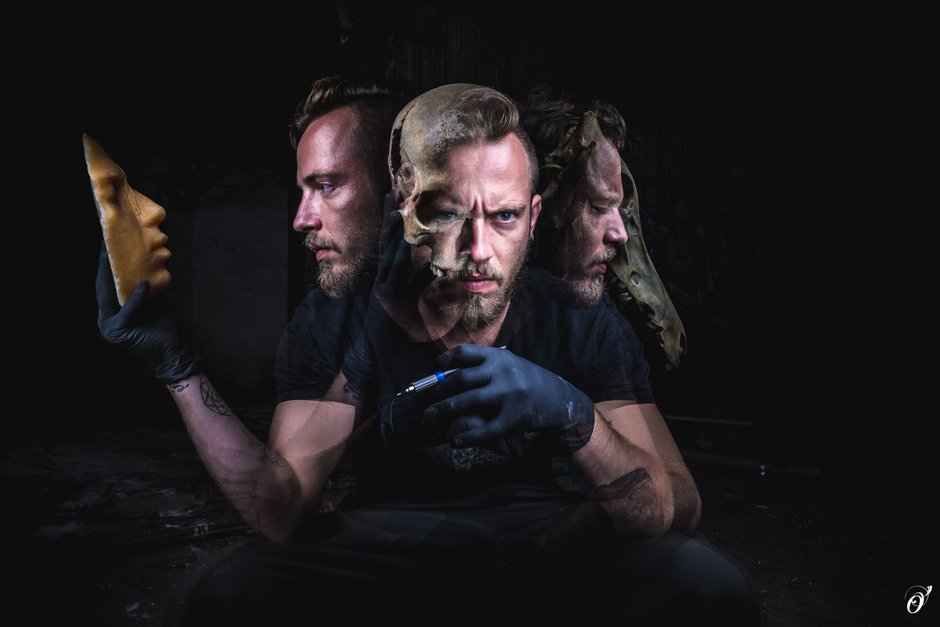 « How do we make swiss-knives ?
Artists who do « a bit of everything » and rather a lot ?
The compulsive curious ones who absorb and redistribute, who bring to life the cultural environment of those that art galleries weren’t made for ?
The artists-artcrafters, fascinated by material and technic ?

We carve them in the doodlers from the back of the class, in the kids who dream of graffiti on the highway, at the back of the familial car or at the regional train’s departure.
In the middle school students who tattoo themselves alone with sewing niddles and chinese ink.

If he leaves Avignon’ s Fine Arts Institute with a national diploma ten years ago, I’d gladly tell you that he taught himself, from his bedroom and on the road.
Nekro Korp’s true fundations are notebooks filled with alphabets and signature lines, entire boxes of loose leaves, body parts offered by mates, full dumpsters of empty paint bombs and a full color half sleave on his lover’s arm.

He observes, interrogates his peers and exercize himself constantly. His first professional advices come from Étienne Abeillon, Calou or Manuel Tattoo Reignier. In 2013, his hygiene formation completed, he’s already solidly trained when he arrives at the Banana in Rouen, and later spend some time in other shops of the area.
Throughout the years he develops his technic and style, anchored in illustration, on the border of neo-trad and graphic, populated with threatening or laughing skulls, mythologic characters, nonchalent flying fish and inextricable black patterns.

Eternally preoccupied with raw materials' treatment, he bases his work on skins and bodies' uniqueness, and is part of a tattooist generation who rebuild customer's relation on quality listening and consideration.

He learns from his colleagues and makes himself an accomplice witness to the massive groundbreaking women's entrance in a tattoo community craving for radical change. Whether they're becoming professionnals or occasionnally emancipating their skins from men's machines, he gladly hands out the pry bar to those knocking down the door, and I hope he knows that if we don't thank him so much, we watch and remember, and we wouldn't say no to a multiplication of gender's traitors like himself.

He lands at Abraxas in 2018, and embrace for three years the very full tattoo parlor's schedule, which complete to build the tattooist he is today, and his parisian clientele.

In the midtime, his path as a graffiti artist is turned upside down after meeting the calligrapher Reano Feros, the urban stencil artist Polo5167 and the typographer Repy1, with whom he engages in different productive collaborations, covering Avignon's walls, printing garment series and ponctually being put under glass during exceptionnal exhibitions.
He experiments leather tattoo alongside with the saddler, harness maker, leather worker, Coralie Caillaud, with whom he designs a purse serie on which he inks his own patterns.

He learns screen-printing from fiber artist Aurore Pélisson, who passes on to him artisanal printing technics, in the heart of her ethical and responsible micro-production, on 100% french materials.

As a member of Tag Déco, and Allô Graffiti, he spreads his murals following artistic comissions, developping a full color world in which human beings erase, in favour of flying aquatic creatures, suspended landscapes and phantasmagorical humanoids.

Swiped away by french actress Adeline Walter, he collaborates with the theater company Modes d'Emploi for Les Manigances, contemporary play questionning the french national novel and the instrumentalization of historic story-telling by the political community, in which his reproduction of colonial paintings give a visible shape to the european subconscious.

Nourished with a decade of drum study at the Conservatory, and never too far for too long from his grand dad's old guitar, we're tempted to laugh a little when he explains he had no will to become an artist. But eventually we understand that what he truly doesn't want to, is to monetize his world, and ever have to explain elsewhere than at the bar how amazed he is by the work of Moebius and Caravage, Lady K and Filip Leu, Damasio and Hakim Bey, Léa Nahon, Banksy and Hugo Pratt.

As far as I'm concerned, I'll keep looking for his characters on Paris' walls, hoping that graffiti artists, street entertainers, and female tattooists win the great war of arts' reconquest by the people, and I'll go have a beer with him.»